You are here: Home » User Reviews 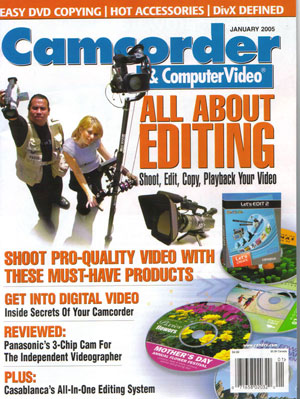 The HI-POD graced the cover of the January 2005 issue of Camcorder & Computer Video, and topped the magazine’s list of must-have pro-quality video products.

In an article entitled “Polishing Up Your Act” reviewer Stuart Sweetow wrote:

“Event Photographers frequently need to get shots from over people’s heads. HI-POD came up with a unique invention; a 15-foot monopod that allows you to pan, tilt and zoom your camcorder from the ground. With the HI-POD you can capture shots from over fences and above barricades, and never be limited by crowds.”

“The design makes it possible to have total tilt plate control of your camera at any height, from six feet to 15 feet. 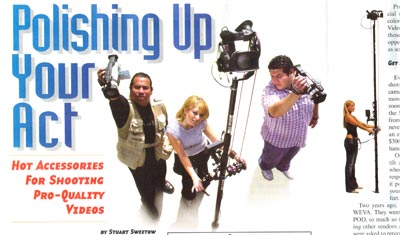 Two years ago, the HI-POD guys made their debut at WEVA. This year, at the opening night party (WEVA 2004) they got some amazing high-angle photos on the dance floor that they played back the next day at their trade show booth.” 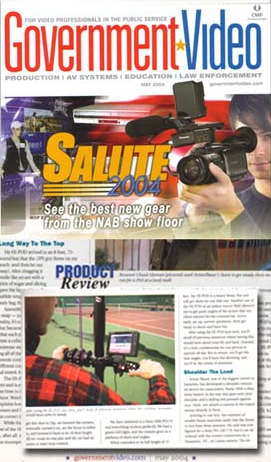 “You will get shots no one else can.”

“Having the need to get tennis footage for a health-inspired PSA, Greg and I took the HI-POD to an inside tennis club in the dead of winter.”

“Wanting to be high above the action was no problem, but everyone’s eyes were glued to the black monolith as we set it up.”

“The HI-POD does attract attention, so be prepared to spend time discussing it.”

“It only takes a few moments to get familiar with the controls, and they quickly become second nature.”

“Another use of the HI-POD at an indoor soccer field allowed me to get great angles of the action that my client wanted for his commercial. Arrive early, set up, answer questions, then get ready to shoot and have fun.”

“After using the HI-POD just once, you’ll recall 20 previous instances where having this would have saved you your life and back. Granted, it’s a little cumbersome for one person to operate all day, but in return you’ll get the best angles, you’ll have fun shooting, and you’ll be the center of attention.”

Over last few decades, we have seen some pretty awesome products and some very innovative technology that has truly changed the game as we know it.  As technology advances and the level of play raises, competition in and around the game opens new doors to a lot of different markets and new businesses.  At the NSCAA Convention I had the great pleasure of catching up with Rick Morales, Inventor and Founder of the HI-Pod, the uniquely robust and dynamic game video capturing system.

Often time we see shaky home-made videos of games that only capture a fraction of the game, or videos of matches where the ball, run of play and players are disconnected or segmented. As college recruiting and game analysis become a higher demand for developing players and teams of all levels, capturing adequate footage become the bigger problem. Even expensive cameras and a camera crew at ground level won’t ensure the best footage needed in terms of capturing most of the field, distant players and the ball in play. Rick’s new Hi-Pod system, as he explains solves the ultimate problem of aerial video capturing. His fully equipment HD video capturing system sores 30 feet into the air and is controlled from the handy monitor located a the base that makes recording a game focused, easy and reliable. Say “Good-Bye” to listening to goal celebrations and “Elevate” your video-recording to new heights.

The Spirrs Team is a Proud Supporter of new innovative products and services that have visionary goals of improving players, parents, coaches and the games as we know it.

Scott Strimple- Altair Productions, Virginia
“We purchased a HI-POD and just showed up on the sidelines of local HS football teams. Once you see this contraption… you realize that it garners quite a bit of attention. The first game we did, we booked a whole season from a private school parent who was impressed with the shot we could get. From here word spread quickly about the big pole at the games and the phone started to ring. We parlayed this exposure into other school events and as such found that when we approached the PTA for graduation, the theatrical faculty advisor and parents about theater etc. that they were already familiar with us.”
Evan Jacobs- Filmmaker
“Using the HI-POD, I was able to set-up and shoot faster than I would have imagined. And the footage looks breathtaking.”
Jonathan Mussman- Producer, MTV
“We used it for an obvious high and wide zooming in to an interview on the carpet (at the 2004 MTV Movie Awards). We also gave a special thanks to Hi-Pod. We loved the unit.”
Gene Warren- President of SFX
“I’m impressed with the ingenuity. I saw it (the HI-POD) at one of the anti-war demonstrations in Los Angeles. It was right in the middle of thousands of people. The shots were magnificent.”
Bill Sloyer­ MTV HI-POD operator
“It is so smooth and easy to use. I used it on the MTV Movie Awards. It too was a star. As I was using it, I had a Japanese production company do a piece on the HI-POD, live from the Movie Awards.”
David Conwell- CNN Engineer
“This is really great. I saw an operator using it (the HI-POD) at the Arnold Schwarzenegger election campaign. There was no room on the press platform, so the operator was next to the platform, behind a 10 foot high light stand. But it didn¹t matter because he had (the HI-POD) extended above the light. What a great tool.”
Eric Espinoza­ Assist Coach to Bill Robinson at UNLV
“This is perfect. For our practices Coach Robinson was looking for something that could simulate the “camera on wires that is seen on Monday Night Football”. The HI-POD is perfect because we can get directly behind the line of scrimmage in the practices and get that great aerial view. It is a great tool.”
Shawn Dell Freelance Photographer/Videographer
“I tried it. It’s really amazing. I really like it. I am going to use it in Europe for the Lenny Kravitz tour. It is perfect for that crane shot over a crowd at the concert. This is gonna be great.”
Shlomo Shapira – Gaza , Israel
“It (HI-POD) is a periscope. Now the cameramen can stay a safe distance away from danger. They can hide behind a building or a tank and extend the camera above to get the shot. Fantastic.”
Splash News ­ Photographer Bill Morgan
“The National Enquirer needed us to get still shots of a celebrity’s home. We were about to hire a helicopter to get the shots at about $1000/ hour; instead we tried the HI-POD. Not only did the HI-POD got in and out of there, but we realized from the photos that a helicopter would have been a waste of money because the palm trees would have obstructed the view of the house. The HI-POD was just below the palm tree branches. We bought the HI-POD immediately.”
John Christensen of Christensen Media
“One of the hottest new forms of entertainment are Drumline Productions, like the movie DrumCore. These events fill stadiums. We have used cranes before, but the audience always complains that their view is obstructed. We love the HI-POD because it doesn’t block anyone’s view. It is only 2 inches in diameter. What’s more, is that it is portable. We can move it in and out of the drum core. Much more interesting shots for the video. So much more variety than the crane because once you set down the crane, you can¹t move it. We will be using the HI-POD at the Rose Bowl for the National Finals.”
Jose Cohen, Cactus Film & Video, Mexico City
“We just introduced the HI-POD with huge success into Mexico . Televisa the largest Mexican network just picked up two units for our version of the reality show Big Brother.”
Rene Caldera – Owner/Operator of PolePix Aerial Imaging
“With our 50′ trailer system it was difficult to reposition for a different angle on the property we were photographing. With the new HI-POD system we just lower it and move it on it’s own wheels. Plus, we can also remove it from the base and go mobile with it. That’s a great advantage for events. We can now get right in with the crowds, yet have a vantage point from above. The HI-POD also opens the doors for indoor aerial photography. Now we can get in places where you just can’t or don’t wish to run a lift. Plus it is far more mobile and higher reaching than even a 14′ ladder!

We’re excited to see what ideas our customers will come up with for using this new system. With the HI-POD there’s now an economical choice for the non-profit groups, student projects, and even simple events”.